We have assembled some of the most talented, personable and engaging tennis pros in NYC. Our pros share a passion to work closely with players of all levels and ages to help them develop to their fullest potential. We are very proud of our tennis professionals and welcome you to read the brief biographies of our pros. 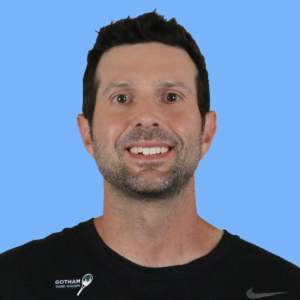 Born and raised in New York City, Chris was a top ranked player in the nation throughout his junior career. He played Division I tennis for Penn State University and achieved one the highest winning percentages in the team’s history. Upon graduating, he delved into the coaching aspect of the game and began working with numerous nationally and sectionally ranked players. Many of these players went on to play high level college tennis. Chris, along with his partner Balazs (Baloo) Turcsik, formed Citi Stars Tennis, a boutique program catering to all levels of tennis which they successfully ran for seventeen years. Chris looks forward to bringing his expertise and passion for teaching to Gotham Tennis Academy as a Co-Director of Junior Programs. 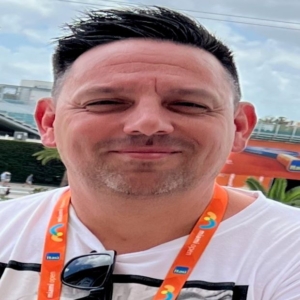 Baloo came from Budapest, Hungary to the USA in 2003. As a junior player, he achieved a national ranking of #5 in Hungary and was a semifinalist in the National Championship and was selected as a national coach in Hungary. Baloo is a USPTR professional certified coach and holds a Bachelor’s  Degree in sports marketing and management.  He has coached players in all Grand Slams, ITF, ATP and WTA tournaments.  At the boutique CitiStars tennis program, which he founded along with Chris DeStefano, Baloo coached many top national and sectional players.  He has helped top 50 ATP players besides helping juniors in the USA and Hungary to reach their dreams on and off the court. He is excited to join the Gotham Tennis Academy team as a Co-Director of the Junior Program.

Andy Stuber
Andy is a teaching pro from Basel, Switzerland. He grew up playing his tennis on European red clay courts and brings a tremendous work ethic and passion. Andy has been known to use his outstanding, European work ethic to teach and inspire our juniors and adults. Andy is comfortable teaching all levels of players. It’s no surprise that Andy gets his inspiration from another Basel, Switzerland resident… Roger Federer. 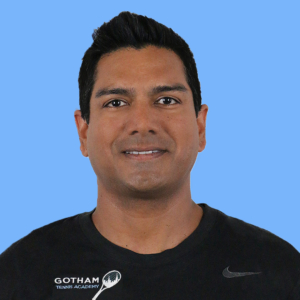 Ajay Kumar
Ajay has extensive experience teaching, coaching and playing at all levels of the game. He has played at a premier high school, a Division I college and on the professional tour. With a background in Sports Medicine, and a degree in Education, Ajay’s in-depth knowledge of the physiology and tennis strategy attracts players of all levels and age. His meticulous approach, coupled with personality-specific coaching, caters to high performance players. As an advisor to Irina Falconi, a native New Yorker and professional player on the women’s tour (WTA), he has developed a unique understanding of how to achieve success on the court at the very highest levels. 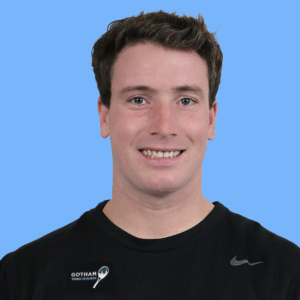 Hunter was born and raised in Stratton Mountain, Vermont, and has proven that Vermont has more to offer than just skiing.  He brings  extensive coaching experience with all levels and ages of tennis players, including with junior athletes in helping them become successful college bound USTA players.  Previously, Hunter was a Director of Tennis at Tamiami Tennis Center in Miami FL and a teaching pro at the Cliff Drysdale Tennis School on Key Biscayne FL.  As a competitive player, Hunter earned All American honors as an NCAA D-3 tennis player; his team won the NJCAA Division-1 National Tennis Championships; and he transferred to, and graduated from, University of South Carolina where his team earned berths in the NCAA National Tennis Championships.  Hunter comes from a Ski Racing family where his father raced on the US Ski Team, and his four sisters were a mix of State champions, Eastern champions, National champions and US Ski Team members.  As a graduate of a ski academy, Hunter enjoys skiing in his free time. 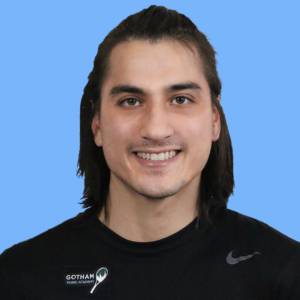 Alec Shaw
Alec is a native New Yorker who grew up in Manhattan. He started playing tennis at the age of 10. He was a strong tournament level player as a junior and played at Emory University in Atlanta, GA. Alec’s teaching style focuses highly on attention to technical details. On the court, Alec engages himself in a dynamic way combining feeding drills, live play and strategy so that students not only develop fundamental skills, but also to use tactical and strategic thinking in constructing points. Alec is great with all ages and skill levels. He admires Roger Federer for his nearly perfect technique, longevity and his ability to hold the entire match on his own racket.

David Graham
David hails from Sydney, Australia. Highlights of his professional tennis career include his top ten world ranking in doubles and his appearance in the semi-final round of the Australian Open. As a coach, David has worked with three top ten players on the world tour. David describes himself as a “technical coach” who enjoys working with players on nuances in their game. Trained by Ken Rosewall, among others, David has a real appreciation for the intellectual and physical aspects necessary for success at a high level. David notes that his favorite tennis match of all time was the Jimmy Connors – Aaron Krickstein US Open battle — he was on the sidelines as Krickstein’s coach. 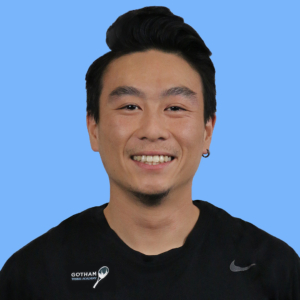 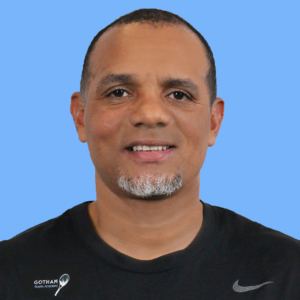 Luis De La Cruz
Luis comes to the Gotham Stadium family from La Aronana, Dominican Republic. An accomplished player and teacher alike, Luis uses his fun, enthusiastic personality to engage his students on the court. Luis has loyal followings in both our junior and adult programs. Luis teaches a methodical, well-organized lesson with a careful balance of instruction and game based drilling. These attributes give Luis the adaptability to work with all levels, from munchkin to tournament player at Gotham Tennis. As a young player in the Dominican Republic, Luis looked up to and emulated the classic serve and volley game of Stefan Edberg. 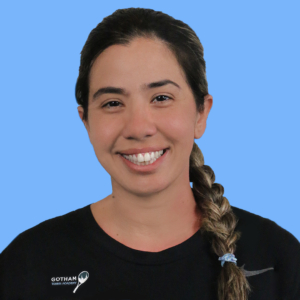 Lucy Herrera
Lucy, originally from Tepic, Mexico, grew up in Houston, Texas where she played junior tournaments and reached top 20 as a Junior in Texas. Lucy attended the University of Houston where she studied psychology. Lucy has been teaching for over a decade. On the court, she is a firm believer of hard work and fundamentals. Lucy’s favorite tennis players are Roger Federer in singles and Bob and Mike Bryan in doubles. 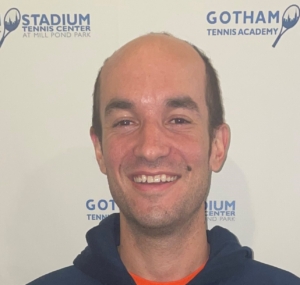 Matt Aaron
Matt was born in Manhattan and grew up in Queens and Long Island. He started tennis at the age of 12. Matt played Division 1 Tennis at Lafayette College. On the court, Matt makes sure that every player follows proper technique to prevent any injuries that could be caused by incorrect form. His favorite tennis player is Diego Schwartzman because he can relate to him and it shows that it doesn’t matter what size you are! Matt works closely with our Directors of Tennis overseeing the weekend junior program. 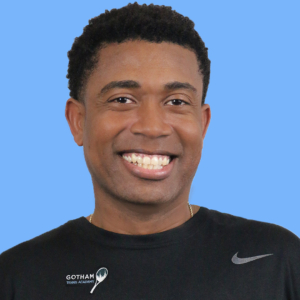 Pedro Avila was born and raised in the Dominican Republic. He started as a ball boy at the renowned Casa De Campo “La Terraza de Tennis”. He started competing at the age of 11 and has many years of successful training and competition experience playing International Junior Tournaments.  Since moving to the US, he has taught tennis at the Brant Lake Camp in Upstate New York, Midtown Tennis in Manhattan and other NYC tennis clubs.  Since the Summer of 2021, Pedro joined our team here at Gotham Stadium. His teaching style is very energetic and positive. Everyone that meets Pedro is struck by his friendly personality. Pete Sampras used to be Pedro’s big inspiration.

Rachel Aaron
Rachel is an Atlanta, GA native. She attended Limestone College in Gaffney, SC where she played #1 singles and doubles all 4 years. She earned All- Conference teams all 4 years in the Carolina-Virginia conference and was an MVP freshman through her senior year. She graduated in 2004 with a degree in Fitness and Wellness. Rachel is a PTR certified professional since 2004. She enjoys working with individuals of all ages and skill level. She looks forward to seeing everyone out on the courts! 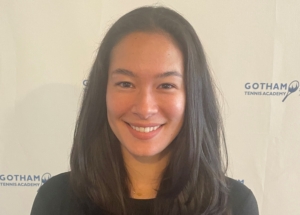 Tatiana Grigoryan
Born in Moscow, Russia, Tatiana started playing tennis at the age of 9. She has experience playing ITF and WTA professional tournaments. Tatiana played Division I tennis at the University of Portland and Fordham University. She further earned her school counseling Master’s Degree at NYU. She enjoys working with players of all ages and skill levels. Her favorite tennis player is Roger Federer because of his class on and off the court. 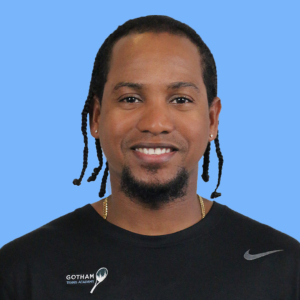 Wilson Johnson
Wilson was born in the Dominican Republic and began his Tennis Professional career at Casa de Campo D.R. He played on the Junior Davis Cup representing his country from 2000-2003. Wilson brings lots of energy and technicality into his coaching. Wilson is well-liked amongst kids and adults. His idol is Roger Federer because of his “flawless” game.